Mariagrazia Portera - "Does the beauty only exists in the eyes of the observer?" 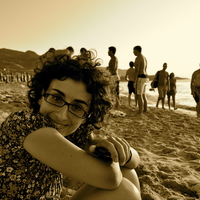 Mariagrazia Portera is a NEWFELPRO fellow from incoming scheme who did her project at the Centre for Croatian Studies, University of Zagreb. She holds a PhD in Philosophy (Aesthetics) from the University of Florence.  Her research interests are aesthetics, history of aesthetics, evolutionary biology. She has published papers and book chapters on the evolutionary origin of the human aesthetic attitude, on the origin of the arts, on the epistemology and research methodology of evolutionary aesthetics. She has spent several research stays in European Universities, such as in Berlin, London, Vienna, Stuttgart, Freiburg and Bremen.

Her NEWFELPRO project is called „Evolutionary Aesthetics. A Bridging Discipline Between Humanities and Natural Sciences (Evo_Bridge)“. Her main question in this project were:
Working on the boundary between the humanities and the natural sciences, the research provideS arguments in favour of the adoption of an evolutionary viewpoint in Aesthetics, outlineS an explanatorily fruitful model of Evolutionary Aesthetics (alternative to the current one) and formulateS a set of hypotheses about the origin of human aesthetic attitude from nonhuman natural precursors. The project contributes to a redefinition of Aesthetics as a philosophical discipline, thanks to an innovative interdisciplinary research methodology and the constant dialogue with the natural sciences.

During her fellowship she has prepared following papers:

Also, she attended lots of scientific events during her NEWFELPRO fellowship, where she actively diseminated her project results.  Some of those activities are listed below:
Her long – term carrier goal is to get a position as an academic researcher in Universities in Italy or abroad (in Europe). She has applied for further European funds to support her research and she is currently working on a new research project.