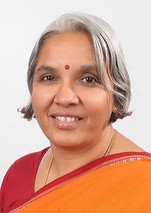 Dr. Radha Dilip Banhatti is in the process of fully implementing her two years long NEWFELPRO project called Modelling Ionic Conductivity in Materials – Glasses, Ionic Liquids & Ionogels (ModelMatSigma) at the Ruđer Bošković Institute in Zagreb which will be completed by the end of this year. She is attached to the Laboratory for Functional Materials (LFM), Division of Materials Chemistry.

Radha Dilip Banhatti has a basic research project in the field of physical chemistry; solid state materials; ionic liquids and new materials.  Study of ionic conductivity today encompasses not only traditional crystalline fast ion conductors but also various types of structurally disordered materials such as glasses, ionic melts, polymer electrolytes and ionic liquids - both neat and confined in supramolecular networks. Amongst various models that were developed in the past three decades, the model MIGRATION Concept based on jump-relaxation class of models has proved to be the most versatile one in modelling conductivity spectra - extracting length and time scales relevant to ion dynamics in systems under study. She is developed this model along with Prof. K. Funke in 2004. In the current project, she is extending the applicability of this model to polaronic glasses, mixed glass former systems and to ionic liquids confined in a supramolecular gelator matrix. This involves modelling frequency-dependent ionic/polaronic conductivities and permittivities of these materials measured in LFM and also the temperature-dependencies of their DC-conductivity. Relevant length scales that characterise the extent of local excursions of the ions or polarons and typical time scales of localized diffusion will help understand factors that influence mobility of the ions/polarons and will help engineer ion/polaron conducting materials for better device applications. A main component of her project is to provide sustained knowledge transfer of the model and its use to the young scientists of LFM, and development of an open-resource software of the model.

During the research activities on this project she is also focused on various ways of dissemination of the project results, knowledge transfer, and training herself with new skills, and of course she seeks actively collaboration with top scientists in her field.

By now, she has published one article regarding her project results:
Four more manuscripts are in preparation and will be sent for publications in the coming weeks. Two further pieces of work is visualised until the end of the project.

Further, her active dissemination of the NEWFELPRO project results can be seen in lots of oral and poster presentations that she did at several conferences:

Her future plan is to continue in research, and play an active part in writing a research proposal in the next few months, involving LFM and a few international laboratories in Europe and America.