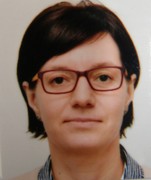 Slađana Strmečki Kos, the picture is taken frorom the website.

Slađana Strmečki Kos is a NEWFELPRO fellow in outgoing scheme that successfully ended her project „Electrochemical study of polysaccharide-protein molecular interactions and their relevance in the selective sensing of polysaccharides in mixtures“ (ELpspINT). She did the research at the Institute of Biophysics at the Academy of Sciences of the Czech Republic under the mentorship of professor Emil Paleček and at the Division for marine and environmental research  at the Ruđer Bošković Institute.

Results of her project are writen in two scientific papers. In cooperation with Mojmir Trefulka, Pavlina Zatloukalov, Borivoj Vojtešek and  Emil Paleček she wrote an article titled „Immunoassays  of chemically modified polisaccharides, glycans in glycoproteins and ribose in RNA“. The paper published in Analytica Chimica Acta. Additionally, in preparation is an article titled „Tensammetic analyses of catalytically active biomolecules on mercury electrodes“.

After the completion of her project she continued her scientific work initiated within NEWFELPRO project. Furthermore, she will be a collaborator of two CSF projects. Also, she wants to apply for funding for her new project that she has on her mind.

We congratulate and keep our fingers crossed to her to accomplish all future plans!