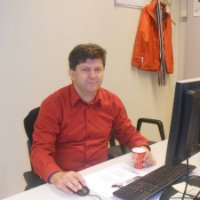 Zivorad Tomovski is NEWFELPRO's researcher in incoming scheme, who arrived from the Faculty of Natural Sciences and Mathematics (University of Skopje) to the Department of Mathematics at the University of Rijeka to perform his research on a project titled Modeling anomalous diffusion by generalized Langeven, Fokker-Planck equations and fractional diffusion-wave equations (Anomalous diffusion) under the mentorship of  dr. Bojan Crnković.

Professor Tomovski‘s  project is aimed at reviewing some partial differential equations that are at the center of interest in modern physics. Recent advances in the fractional differential equations stimulated new examples of applications in fluid mechanics, viscoelasticity, electromagnetism, hydrology, mathematical biology, electrochemistry, robotics, signal processing, turbulence and many other problems. Fractional differential equations are useful tools for modeling many unusual phenomena in nature and theory of complex systems. The main objective of adoption and research diffusion equation fractional order is to describe the phenomenon of unnatural diffusion which is commonly encountered in transport processes of complex and / or disordered systems, including fractal media.

On the basis of this project are issued or under preparation following scientific papers:
• Published papers:

During the implementation of his NEWFELPRO project he held a lecture "Complete monotonicity of the MIttag-Leffler functions and opial type inequalities" at the seminar in organisation of the  Department of Statistics at the University of Rome.

This is the fifth international research scholarship for Professor Tomovski, and the second one in Croatia. As of yet, he was the manager of the five research projects:

Professor Tomorovski is a reviewer for a number of reputable scientific journals, a professional member of the Research Group Mathematical Inequalities & Applications (Melbourne, Australia) since 1999, and a member of the Humboldt and DAAD Club since 2008. After the implementation of his NEWFELPRO project, further wishes and future plans of Professor Tomovski are to continue his career as a university professor at one of the universities in Republic of Croatia.